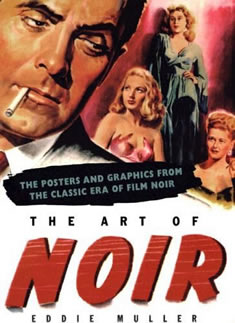 "A particular delight if you’re intrigued by the whole world of film advertising and the way ad art was designed to lure customers to drop their dimes, quarters (and, eventually, dollar bills) at the box office in the ’40s and ’50s."
—Robert Osborne, Hollywood Reporter

"In the images and writing of The Art of Noir, Muller has nailed down the essence of the genre."
—Adam Bregman, S.F. Chronicle

"Sleek and deadly as a pair of silk stockings . . . there’s a whole malignant universe of desperate fun in these pages."
—George Tysh, Metro Times Detroit

Review from the Village Voice

THE ART OF NOIR: THE POSTERS AND GRAPHICS FROM THE CLASSIC ERA OF FILM NOIR

Overlook Press, November 2002
Available in both hardcover and trade paper

Film Noir is all about style, even as much as it is about crime. The poster art from the noir era has a bold look and iconography all its own. A sizzling marriage of sex and violence—the sinuous figures of femmes fatales alongside the granite features of the tough guy stars—made this artwork dynamic and dangerous.

The more than 330 dazzling posters included in this volume range from classics Out of the Past, Touch of Evil, and The Big Sleep to obscurities such as The Devil Thumbs a Ride and Blonde Ice. Featured are rare offerings from France, Germany, Italy, Spain, Belgium, and Japan, rounding out the knockout graphics of Hollywood. Background information is provided on the illustrators, many of whom have rarely received credit for their work.

The Art of Noir is the biggest selling poster book in Overlook Press history, its been translated into French by publishers Calmann-Levy, and its was nominated by the Mystery Writers of America and Mystery Readers International as the Best Critical/Biographical Work of 2002. It’s a lurid and indispensable companion for movie buffs and collectors, as well as artists and designers.

SAYS EDDIE "Sometimes selling a book is blissfully simple. I sent a two paragraph fax to Overlook and said 'Somebody’s going to do a film noir poster book and it might as well be me.' It took about two years to assemble and every minute was fun. If you don’t love this stuff, you’re not an American—or French, Italian, German, British, Spanish, Japanese, Swedish . . . A dame with generous decolletage brandishing a .38—who doesn’t love that?"