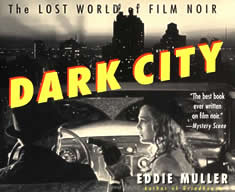 "Muller's particularly good at tying in the noir ethos surrounding these films and their makers in real life. The guy's got moxie in spades."
—Uncut

"San Francisco journalist Muller... steps from the shadows with his own trenchant assessment of noir fatalism.... Cleverly adopting the genre's hardboiled patois, Muller writes with real flair, and he also has an eye for potent quotes.... Credit for the very effective design goes to St. Francis Studio, which is Muller himself."
—Publishers Weekly

Eddie interviews himself regarding the roots of noir.

RECOMMENDED: Noir of the Week

Dark City is unique among film books. It entwines classic silver screen fictions with intriguing factual back-stories about the people who created the moody and mysterious world of film noir. The truth is often bleaker—and more cruelly humorous—than the darkest cinematic concoctions. The author dispenses with the staid formalism of most film writing, relating this slice of cinema history with the headlong thrust of crime fiction, peppered with the hardboiled argot of the period.

Between the big-screen shakedowns and seductions emerges a real-life swirl of labor racketeers, corrupt moguls, "parlor pinks," and femmes fatale. Dark City presents post-WWII Hollywood as ground zero in the explosion of artistic, political, and cultural cynicism that engulfs us today. And it manages to be funny at the same time. The book is lavishly illustrated with more than 200 black and white photos, and a color insert featuring classic film noir movie posters.

Dark City was nominated for the Edgar Award from the Mystery Writers of America as "Best Critical/Biographical Work of 1998," and it has become one of the most popularly acclaimed works on the classic film noir period.

SAYS EDDIE  "When I did this book I thought it'd be a fun one-off project. I was so burned out on exploitation films after Grindhouse that I just wanted to write about movies I actually liked. The turning point was when Dennis Bartok, programmer at the American Cinematheque in Hollywood, started giving this book to people as a Christmas present in 1998. Next thing, he was asking me to program a noir festival and after that there was no turning back. It'll soon be the 10th anniversary of this book-maybe it's time for a revised edition that includes the three chapters I left out of the original." 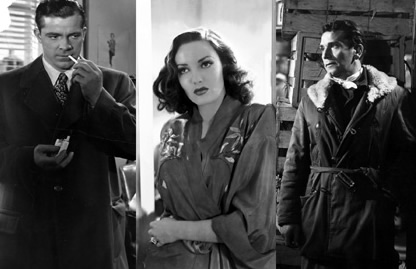